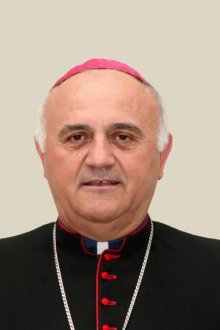 nor Đuro Gašparović was born in Golubinci (Srijem), on 20th June 1951 as a son of Antun and Ruža Gašparović née Bešker. He finished his primary school in Golubinci in 1966. He went to The Interdiocesan Boy Seminary in Zagreb for two years and to The Lyceum in Đakovo, where he graduated in 1970. He attended Philosophical and theological studies in Đakovo from 1972 to1977.

On 29th June 1977 he was ordained a Roman Catholic priest by Bishop Monsignor Ćiril Kos. His first ministries were in Srijem: he was a curate in Ruma (1977/1978) and a priest in Irig in 1978/1979. In 1979 he went to Rome to study. As a student at the Pontifical Croatian Institute of St. Jerome in Rome, he graduated and won a master’s degree in Liturgics at The Pontifical College of Anselmianum in 1981. A year later, he obtained a degree in canon, civil and international law, from The Pontifical Lateran University. In 1980, he was appointed a vice-chancellor and procurement clerk of the Pontifical Croatian Institute of St. Jerome in Rome. He was also appointed an Official of The Congregation for the Evangelization of Peoples in Vatican in 1992. On the Feast of St. Cyril and Methodius, the Slavic Apostles, on 5th June 1996, Pope John Paul II appointed him an Auxiliary Bishop of Đakovo and Srijem. On 5th October 1996 he was ordained Titular Bishop in Đakovo. Since 15th July 1999 he has been given special authorities by Pope John Paul II and since 1st October 1999 he has been Vicar General for Srijem, based in Petrovaradin. As Vicar General he was in charge of Srijem part of the Diocese, until it became independent on 26th October 2008.